A single-page application (also known as SPA) is a web application that uses one URL for all its screens. The browser loads a page from the URL one time for the whole session. During its functioning, the application sends requests to the web server without changing the URL. Such applications are quite popular because they allow making web pages more dynamic and responsive.

LoadNinja has functionality to run scripts against single-page applications in the same way as it runs scripts against regular web applications. After reproducing a website user’s experience during recording, command virtual users to perform the same actions you performed to run load, scalability, and performance tests.

In LoadNinja, such steps are called synthetic steps. Each synthetic step is a logical block that combines the actions the user performs on a specific screen of the application.

To create a synthetic step during recording

All synthetic steps are marked with the icon in the step list.

To group existing actions and events into a synthetic step 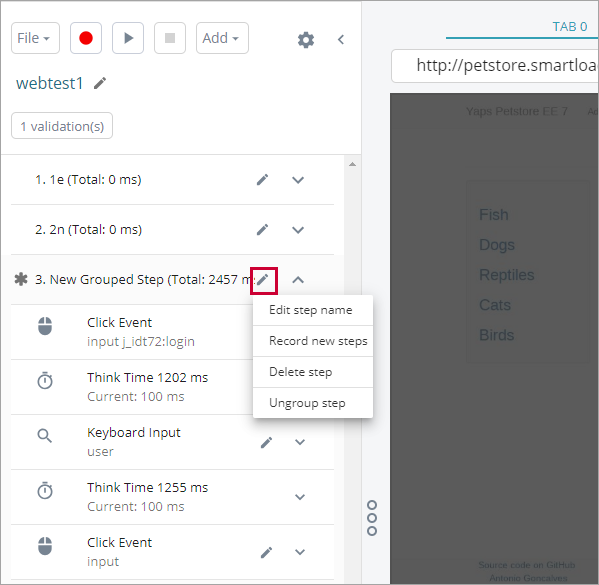 To rename a synthetic step

To ungroup a synthetic step

By ungrouping, you remove the synthetic step from the step list. This action does not affect the events and actions that the step contains. All of them will be preserved and moved to the step above.

To learn how to delete a step completely, along with all actions and events it contains, see Delete events or steps.

To try out testing single-page applications, create a script to test the Fonty website:

It is a single-page application that can replace the font on any website with one of the fonts from Fonty's database.

The replay results should appear without any issues. This means our script works properly. You can safely append it to a scenario and run a load test based on this script.